In the background of the painting are represented the ravines of Mount Dicte, on the island of Crete, the hiding place  of  child Zeus. It is said, relates Lucretius (De Rerum Natura, II, 33), that in this place the Curetes Dictaei once concealed the famous cries of Zeus. Children around a child, armed, with tireless dance, they beat bronze on bronze. Rhythmically they shook the terrifying crests of their helmets. The crash was motivated by the fact that Cronus / Saturn, if he had discovered his son, would have brought the baby to his jaws and wolfed him down. In his place  Rhea offered her consort a stone in swaddling clothes. 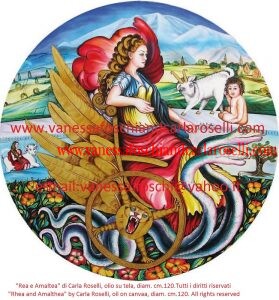 It is said that the mother of the gods was the one who taught the art of iron working to the Dactyli Idaei; inhabitants of the admirable cave on the Hellespontic Ida, where the renowned judgment of Paris  took place, they were the first to beat this metal (Diodorus Siculus, Historical Library, XVII, page 251).

Their homonyms are the Cretans Dactyli Idaei  whose origin Stesimbrotus of Thasos (107 F12 Jacoby) tells of: they would have been born from the land of Mount Ida of Crete, launched by the fingers (datyloi) of the nurses of Zeus at his order. Two of them, Tithya and Cillenus, have the name of assistants to the Mother and Rulers of destiny (Apollonius Rhodius, Argonautica, I, 1126, 1127).

Other priests of Rhea, the Corybantes, were the discoverers of the tablets where the laws were written, the so-called kurbeis, according to Theophrastus (Scholia in Aristophanis Aves, gloss 1354). 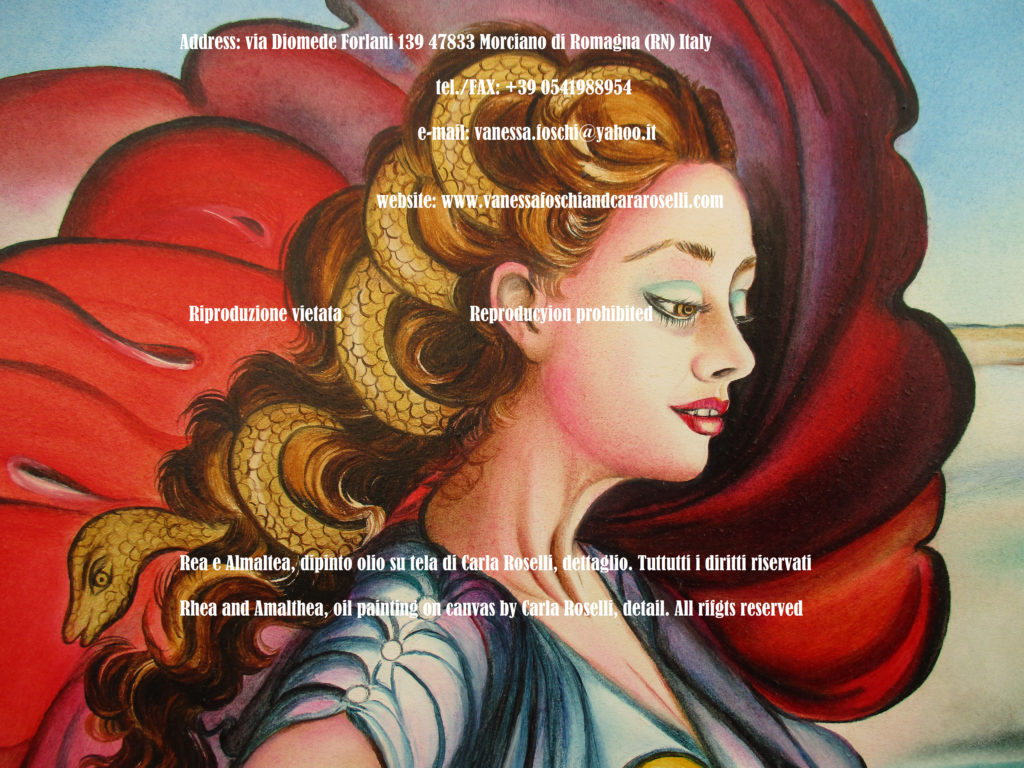 THE DIVINE MOTHER AND PAN

This painting by Carla Roselli depicts Rea / Cybele, the divine mother of beasts and the great mother of  gods, who loves to dwell in the mountains. .  To her belongs the Dog  of many forms, Pan (Aristotle, Rhetoric, II, 23).  She directs the force of all the beasts with sharp fangs, happy with blood.

The howling of the wolves and the fiery-eyed lions are dear to her; also the crags covered with woods and the deep echoing valleys (Homeric Hymns, XIV, vv.15, 16).

From Rhea, who has the beautiful throne on rugged Dyndimus, the winds, the sea, the snowy seat of Olympus and the land below have their fulfillment; thanks to her power the gusts of storm cease; when she ascends heaven from her mountains, Zeus himself  place; and all the other blessed ones revere the terrible goddess (Apollonius Rhodius, Argonautica, I, 1092-1102).

She instills security on the lofty places, be they mountains or high walls. 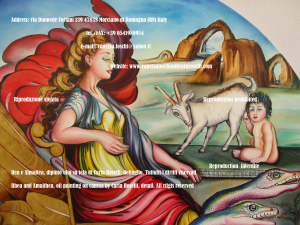 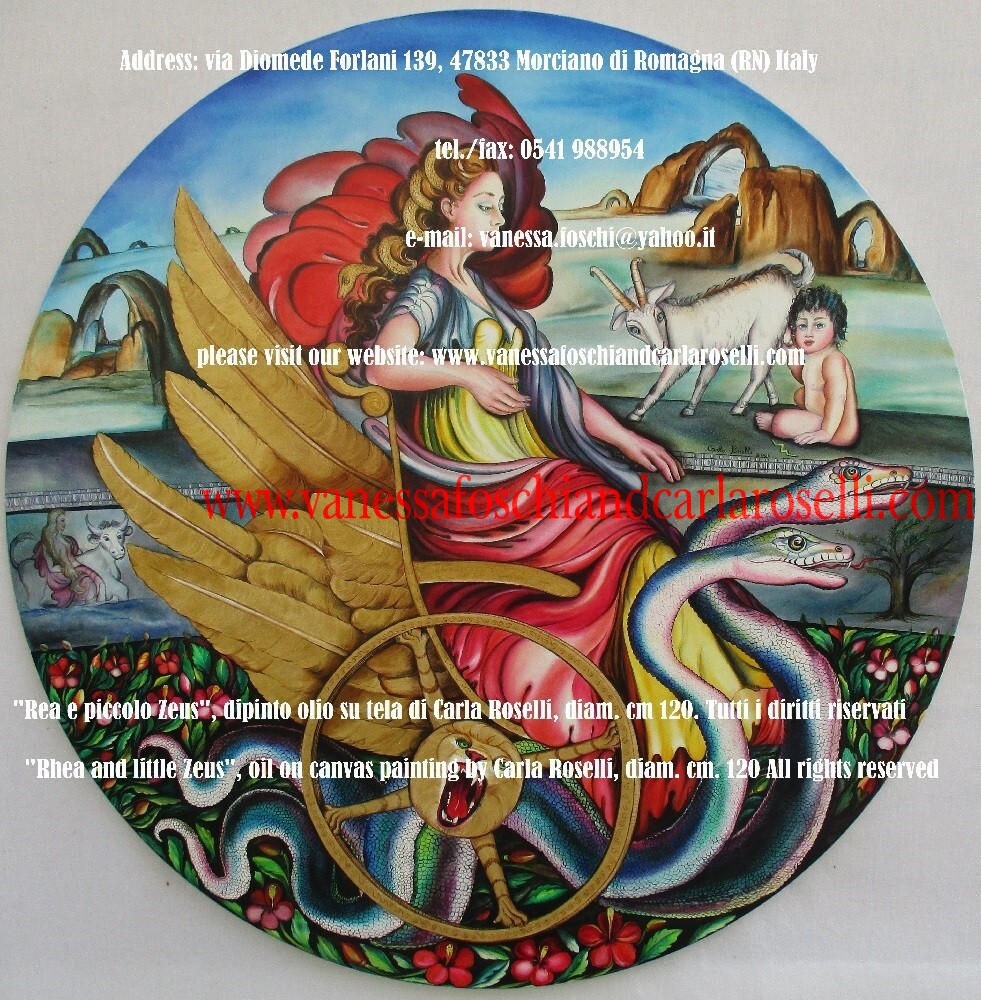 Next to the goddess is the little Zeus, hidden by her on the island of Crete. The artist portrays the child sitting with his nurse,  goat Amalthea. The goat,  native to Olenus in Aetolia (Ovidius, Metamorphoses), was afterward trasformed in the homonym constellation. Somes say that with Amalthea’s skin Zeus  created the Aegis, the shield of terror (Scholia Palaia en the Iliada, II, pag 48). With it the god spreads thunders, lightnings and whirling storms (Homer, Iliad). 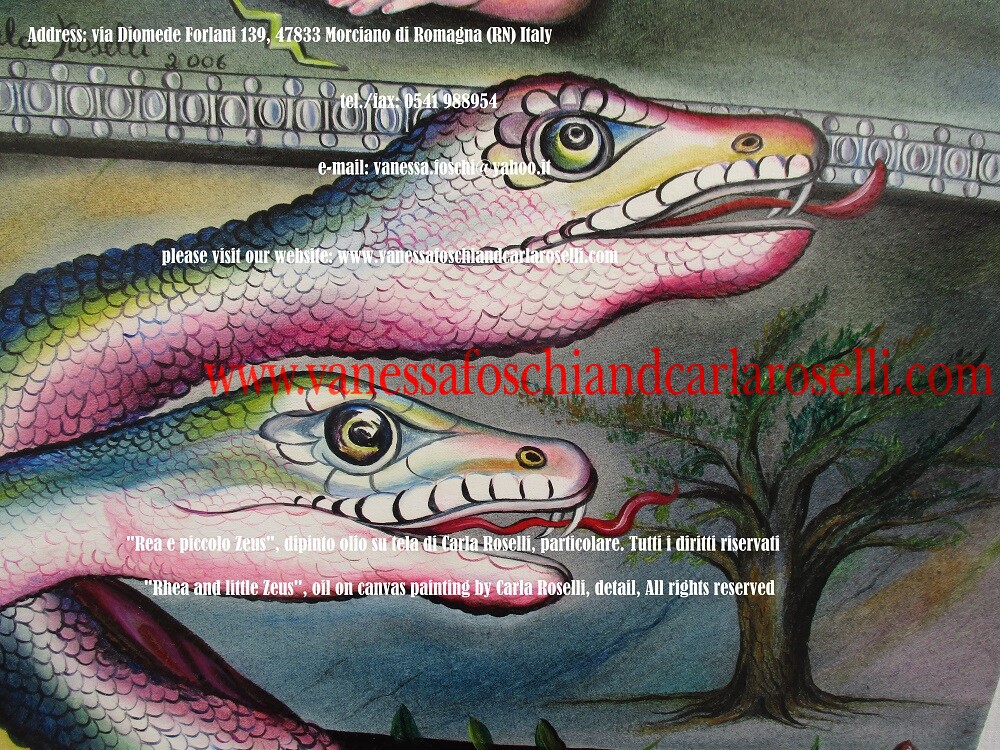 In the painting Rhea is driving a winged chariot pulled by snakes, eventual prerogative of her daughter Demeter. 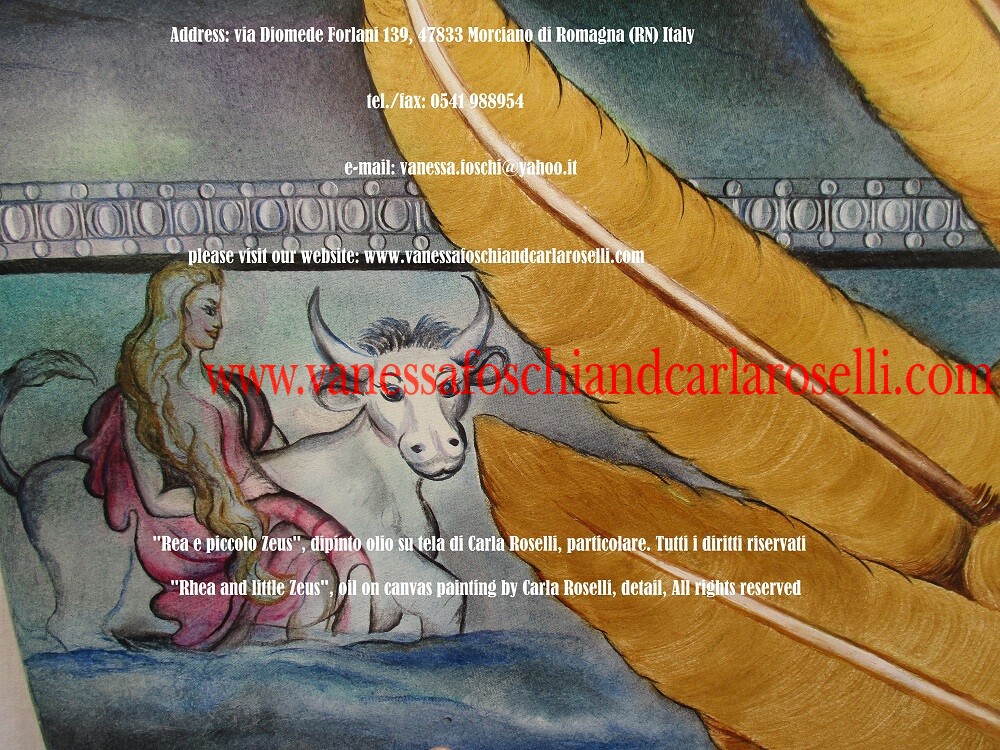 EUROPE AND THE BULL

An enterprise by Zeus adult is inlaid on the frieze; it is  the crossing from Phoenicia to Crete in the form of a bull. Princess Europe clings to his back. From the union between the two, the dynasty of Minos was born, which established supremacy over the sea and dominion over the islands, subjecting even Athens to tribute of human blood.