Apollo and the dragon

In this painting by Carla Roselli are represented the dragon and  little Apollo, the god born near the beautiful, towering palm of the rocky Delos (Hymns, III, 18).

He is caught in the act of shooting his brilliant darts at the dragoness; ancient scourge of the earth and the sea, it lived on the slopes of Parnassus, a mountain so named for the ark (Làrnaka) of Deucalion which had landed there after the flood.

The dragoness was called Délfina according to Meandriius (Scholia in Apollonii Rodii Argonautica, B 7, II). She was famous for having been chosen by Hera as nurse of the portentous Tiphoeus, a giant she generated without her consort Zeus (Homeric Hymns, III). Callimachus instead believed that the monster was a male and was called Pito. He describes it thus:

“Pito, great serpent that with terrible jaws encircles Parnassus in nine turns of the twisted coils.” 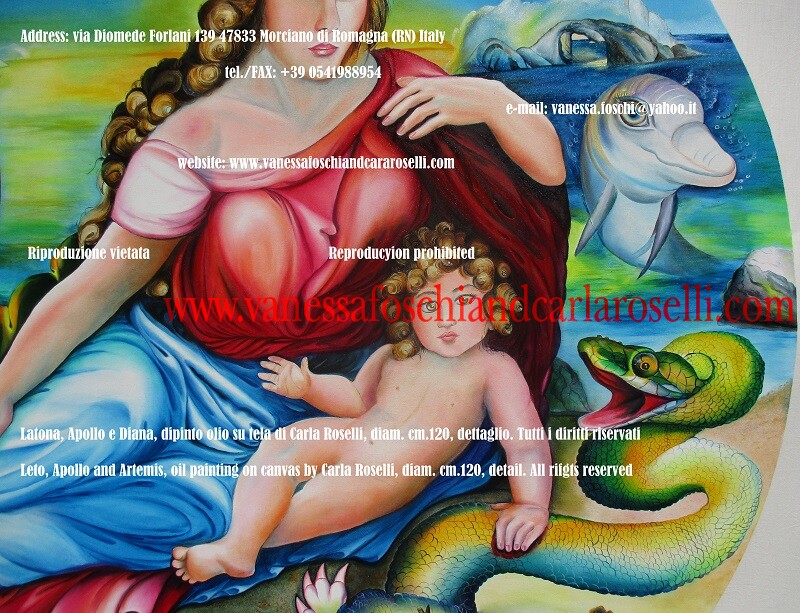 According to Statius (Thebaid, I, 562-569) Python was a blue-green monster one hundred years long and born from the earth; his sinuous scrolls encircled Delphi in seven dark curves; with the rubbing of the iridescent scales he even returned the very hard trunks of the old oaks; black poison dripped from his forked tongue;

Apollo shot him down by catching him while he was having a drink at the waters of the Castalia spring; and he had to consume many arrows bearing deadly wounds.

The author of the Homeric Hymn to Apollo, says that the place of the god’s enterprise was called Pito, from the verb πυθω: because that’s where the mighty flames of the sun caused the immense dragon to dissolve on the nursing earth (Homeric Hymns, III, vv. 370-4). 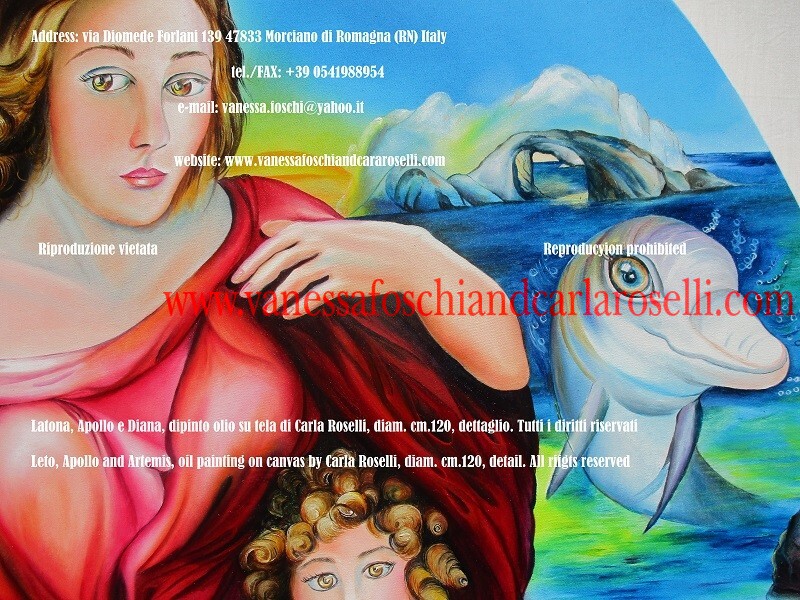 From the untouched hair of Apollo ooze droplets that are a remedy against all evils; where they fall to the ground all things will not be harmed by death (Callimachus, Hymns, 38-41).

At the birth of pure Apollo  swans flew seven times in a circle around Delos (Callimachus, Hymns, 4, 249-254); for that day the island became all gold; its clear waters and its sources flooded golden fields in shining streams ; the foliage of the olive trees sparkled   (Callimachus, Hymns, IV, 260-264).

Before the birth of the god, the island wandered over the sea and the gods called it Asteria: because they saw it from above shining sharply like a star among the blue waves (Pindarus, Peani). According to Callimachus, Asteria had jumped into the sea and turned into an island to escape Zeus. As she was the only one to welcome meek Latona, Apollo made her sacred and inviolable, filling her with riches; for Apollo is rich in gold and treasures, as could well be seen in Delphi (Callimachus, Hymns, II 34). In the painting Carla Roselli portrays Apollo with his mother Latona, his sister Diana and the dolphin, the animal into witch the god was transformed   to lead the Cretan merchants to Delphi, future guardians of his oracle (Homeric Hymns, III, v.400).